Although South Africa has a long history of formal sector employment and formal VET (Wedekind 2018b), the current economic context is one in which few young people make successful transitions to formal employment (McGrath, Powell 2018). One policy response to this, the National Development Plan (NPC 2012), has been to focus on large-scale infrastructure projects that seek to strengthen the economic capacity of specific locations in order to stimulate further development (EDD/DHET 2014). Skills and capacity development are articulated as being central to these strategies in the official documentation. However, these projects have proved challenging in terms of coordinating stakeholders and generating significant employment benefits (Rogerson 2001). 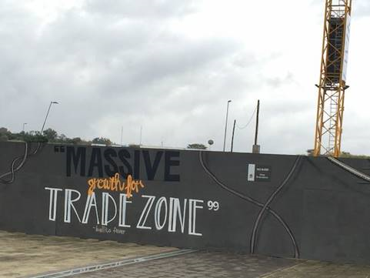 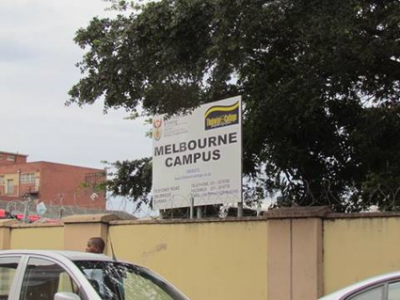 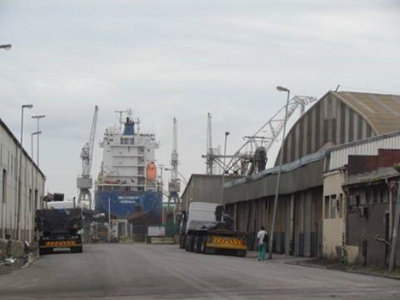 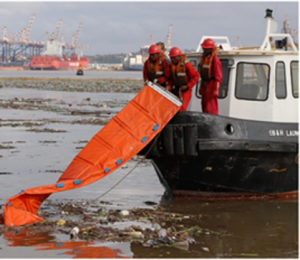 Through a specific analysis of the character of local skills system impacts, of the Strategic Infrastructure Projects, Operation Phakisa and the Special Economic Zones, focusing on two specific cases – the Durban-region maritime economy and the Dube TradePort SEZs greenhouse agricultural production (known as Dube Agrizone) – the project has made considerable progress in exploring how features of national policy interact with the skills system at a local context. A wide range of semi-structured interviews have started to generate insights into both the dynamics of national policy and as well as how local actors interact with these policy processes. For example the SIP programme – in the form of the SIP2 Durban Gauteng Corridor – sought to encourage skills production linked to construction type project work orchestrated mainly by parastatals, whilst the Oceans Economy Phakisa has focused more on wider skills demand that can be unlocked through better institutional collaboration. In terms of the national SEZ programme, emergent practices around skills have remained very modest in a context of the Dube TradePort seeking other actors to take a lead in a field where it acknowledges it has only limited capacity. Actors in the local skills linked institutions note that there is substantial flux in the way in which skills demand is expressed and the bulk of the public-skills system finds it challenging to respond to this rapid change. Further work needs to be done in understanding specific dynamics around some occupational categories and how they have been handled in this context. Progressive moves by the large parastatals to increase the number of women in certain previously male-dominated occupations are an example of positive changes around occupational dynamics. 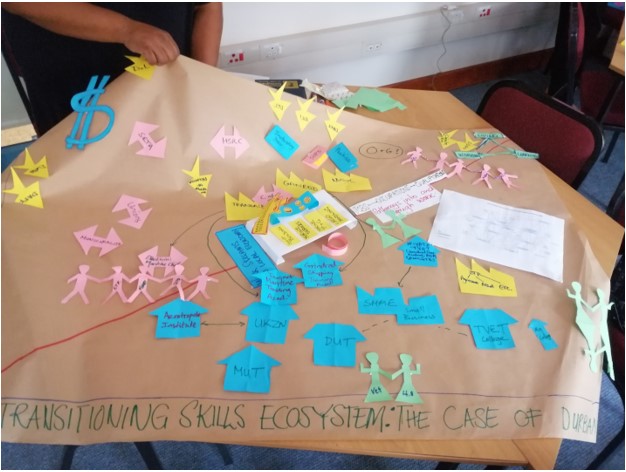 A Fragmented Skills ‘Ecosystem’: The Case of Durban

There is spatial significance to the way in which the icons are arranged on the case map. At the very centre of the ‘ecosystem’, lies the four main work streams which were chosen to act as the entering-wedge into the Durban maritime skills sector. The four work streams are Marine Services, Cargo-Handling, Marine Protection and Governance and Ship Building. These ‘streams’ are clusters that encapsulate the jobs-occupations-qualifications framework we use to illustrate the educational-occupational pathways contained within the Durban Maritime Economy. Using our preliminary interviews, contextual literature and desktop research, we argue that the further from the center of the map, the further are the icons (which represent various ecosystem actors) from being influential within the maritime economy.
The facilitating verticalities of this ecosystem are policy interventions from the state, the various state departments which are ‘supposed to’ facilitate the implementation of these policies, as well as State Owned Enterprises and private national and multinational corporations which have much influence on these work streams at the level of industry as well as education. The main policy verticalities are Operation Phakisa and the Strategic Infrastructure Projects (SIPs). The state-actor verticalities comprise of the various departments (labour, agriculture, fisheries and forestry, trade and industry, transport and higher education and training). The State Owned parastatal which is mainly influential in this space is Transnet and the private enterprises that are influential are Grinrod and MSC. The horizontalities include various educational institutions, such as UKZN, MUT,DUT, various TVET colleges, the Transnet Maritime School of Excellence, the Grinrod Training Academy, small to medium enterprises (SMMEs) which lie peripheral to the larger national and multinational corporations (but are trying to enter this sphere of influence), research councils, unions and municipalities. The scattered arrangement of these actors, with minimal linkages in-between, represents the fact that at the moment, we are not are not sure of how and if these actors interact with one another to enhance education, livelihoods, sustainability and social justice. We are not just interested in how individuals pick up these skills and enter these occupations but we are also interested in how these linkages can be strengthened and / or facilitated in order to improve the pathways into and through the Durban maritime economy.
So far, from our positionality we see the stagnation of policy (Phakisa and SIPs) since the actors we have interviewed thus far attribute none of their activities to the influence of any of these state-led development initiatives. This is illustrated by the distance of these policies from the center of the case map.
There seems to be tension between private VET and public VET institutions. This is evident on the influence that the former has over the latter and the lack of interaction between the two which is illustrated by the disconnection between private VET and the alienation of public VET as shown by its distance from the center. The role of the Dube Trade Port, a special economic zone which is an example of the SIPs intervention, is yet to be ascertained hence we see it as a standalone actor on the map, again without any known connections to the rest of the actors in the ecosystem
On the ideological side of the coin, we see human capital theory having an immense influence on the activities of the various actors; the idea that education is an investment in human capital which will yield dividends in the form of improved livelihoods.
Although the maritime economy is the talk of the town, the actual resource flows in the wake of much praise for policy are quite miniscule and unpredictable. This further disables the public sector from living-up to its policy ambitions and gives credence to the private sector.
Written by Themba Tshabalala and the Durban case team