In 2007 it was confirmed that Uganda had sizeable and commercially exploitable oil and gas reserves. Work is underway to construct a refinery and a pipeline to link the field in Western Uganda to the Tanzanian coast. This development has the potential to transform economic growth and formal sector employment. The 2008 National Oil and Gas Policy (MoE 2008) stresses the need to maximise national employment and in 2015 the Ministry of Energy launched a National Workforce Skills Development Strategy and Plan (MoE 2015). In response to this and similar developments in neighbouring countries, the British, German and Norwegian governments (with international oil company co-funding) have initiated the SOGA programme to support the maximisation of local employment, particularly for marginalised youth and women, through skills development (SOGA 2015). However, oil and gas projects remain highly contentious (Di Muzio 2015; Andreasson 2017). We are also mindful of the work of local communities and NGOs that seeks to overcome the potential negative social and environmental impacts. This case context will be the basis for our review of attempts to link local skills and employment into a major oil and gas project.

In Uganda two particular cases have been set for consideration; namely, Gulu and Hoima. Whereas the former case seeks to discover how vocational education and training can help to recover livelihoods in Gulu after twenty years of violent insecurity, the Hoima case is viewing the challenges to vocational education which have risen out of the social expectations and excitement, that relate to the discovery of oil and gas in the region. The research, therefore, deploys the participatory action research methodology to look for solutions, which will inform the various stakeholders on the issues concerning youth and skills development, employability and sustainable livelihoods in Hoima and the Bunyoro Kingdom.

In March and October 2019 Professor George Ladah Openjuru led a team of researchers from Uganda and the UK to Hoima district where eight VET institutions were visited as research samples. The staff and trainees at the institutions were introduced to the research project, explaining the goal and objectives of the research project.  Important themes that emerged during these visits was that vocational education and training is not a sub-system to the mainstream system of formal education, which oftentimes places theory above practice or hands-on. Therefore, students should be given the opportunity to choose the course they want to advance, deleting the opinion of ‘diverting off the mainstream education into the subgrade of technical training’.

Since these introductory visitswe have started the task of mapping relevant institutions and individual opinion leaders, whose stories will be collected as data for the research project. A round table (RT) event was successfully held on January 7th 2020. This included stakeholders from local VET institutions, local government and an international NGOs.  We had fruitful conversations about standardizing infrastructure and courses so that trainees may conveniently fit into the competitive arena of employment. Members at the event also agreed that local governments should be influenced to support private vocational institutions because there is provision for that in their annual budgets.

We are also continuing efforts to define the term ‘reducing inequality’ in relation to ‘inclusion’ in Hoima. One has to consider the roles and benefits thereof for all stakeholders. Retired people, for instance, will have empirical knowledge about the skills, and can share their experiences with youth trainees in Hoima, and support the establishment of employment opportunities, companies, etc. where the graduate trainees might readily find employment.

In the next phase of the project we will be conducting individual interviews with stakeholders, and it is planned that the entire region of Bunyoro will be represented.

The VET 4.0 Research Project Hoima case study is pegged to the discovery of oil resources in the area and the associated infrastructural, commercial and technical developments. In consonance with the research goal of Reducing Inequality and enhancing Sustainability through Skills Development in Africa, the case looks at the role of BTVET/VET in skills development that will match the labour market demand in the sectors with such links that  have developed as a result of the discovered oil resources in the greater Bunyoro Kitara region that covers, in addition to Hoima district, Kibaale, Kagadi, Kakumiro, Kikuube, Buliisa, Masindi and Kiryandongo districts. These districts mark the geographical scope of the Hoima case.

At the centre of the skills ecosystem framework for the Hoima case are a set of formal, informal and non-formal vocational education and training institutions that design various training programmes for learners. We are interested in understanding their response to the emerging technological advances more generally and specifically,  in which demand for quality and standardised products, decent work and skilled labour are directly and indirectly created by the oil and gas industry and the associated developments in various sectors of the economy through a multiplier effects of the oil resource discovery. The research is based at a branch of Gulu University, which is also an actor in supporting vocation education training through its community engagement department, training of personnel for agriculture (including aquaculture) and research. 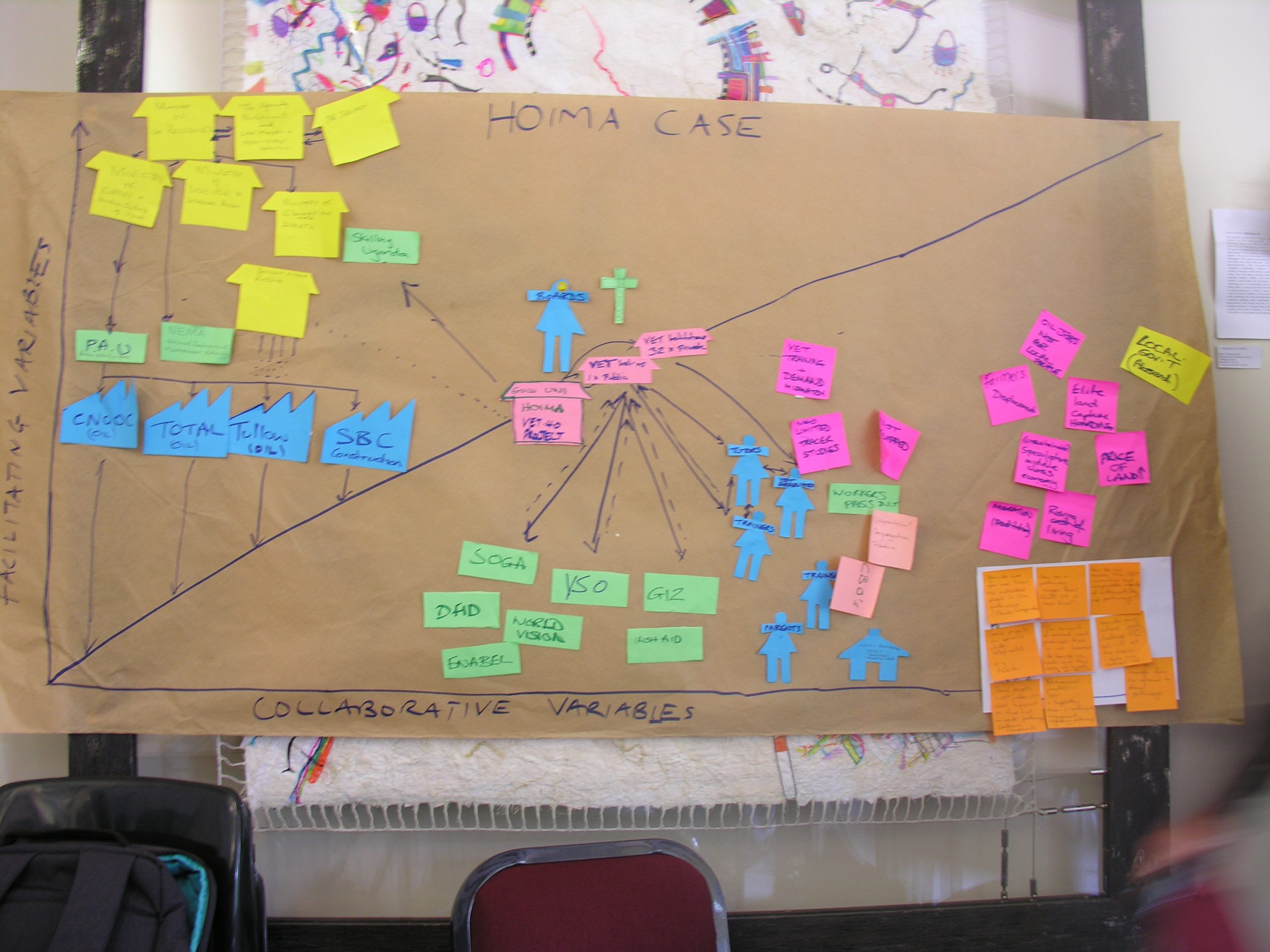 From the chart, the vertical axis indicates the facilitating variables arranged hierarchically while the collaborative variables are on the horizontal axis. These are the key stakeholders in the skill ecosystem development in the Hoima case.

Directly involved in the implementation of the curriculum and enhancing skills development as well as developing pedagogies for just transition in the wave of these developments are the VET Trainers, administrators/Principals and Directors who directly and closely work with the Ministry of Education and Sports (MoE&S). They explore various pathways for the different domains in various sectors such as agriculture, Metalworks, leisure and hospitality and Cyber Technology and design or review programmes suitable for them. Since majority of the BTVET/VET providers are private institutions, most of the formal institutions are managed by the Board of Management/Governors that pass on policies on the governance of such institutions. Associated with BTVET/VET institutions in Hoima are parents, workers, and VET graduates who feed the institution with learners, and offer various support such as advocacy and lobbying.

Also, there is a surge in local businesses such as transport, hotel, tour agencies, land and estate agencies as some of the potential collaborative agencies. As such, there are linkages and reliance of these businesses on the BTVET/VET graduates for their robust operations. How much of this linkage and reliance can result into advancement in the skills remains yet to be discovered and revealed by this study.

On their part, donor and NGO development partners have immensely come on board to support the local skills development technically and financially. These include DFID, SOGA, VSO, World Vision, USAID, GIZ and ENABEL. Apparently, there is justification for donors to invest in skills providers in the region with a particular pro-equity stance to justify the policy which will lead to better training, enhanced skills for decent work and livelihoods and hopefully equitable development in the region.

On the side of facilitating variables, the three arms of the Government of Uganda (GoU) and related statutory agencies/ authorities are directly or indirectly involved in terms of either policy direction, financial support of projects/programmes or regulation of VET institutions.  Particularly, Education and Sports, Energy and Mineral Development, and Information and Communication ministries of Uganda, in conjunction with the entire executive, the legislative and the judiciary as arms of government get involved in the operation of oil and gas in terms of offering policy directions, laws and regulation monitoring and supervision at various levels. The guidance of these arms of government apparently facilitate or act as catalysts for the development of the skills ecosystem. Notably, in terms of state agencies, the regulate and monitor the compliance of the various companies to state policies related to oil production and environmental sustainability in the oil affected area.

In the Hoima case we are also interested in the role of the Bunyoro Kitara Kingdom and the Local Governments in the region as stakeholders and their role (or absence) in skills ecosystem enhancement.  Similarly, we question the technical capacity of the VET institutions in the area to develop human skills to suit the requirement of the modern labour market.  In addition, we are interested in the role or absence of crucial technical schools such as agricultural colleges.  Finally, we also have big questions regarding the mismatch between the skills demand of the oil industry and their supply by the existing local VET institutions and the  tensions regarding local versus national benefits especially from the oil exploration and development which will  likely perpetuate instability in the oil developing area (“oil curse”).